HERE ARE SOME ANSWERS TO YOUR QUESTIONS TO HELP YOU TO GET AN IDEA ABOUT THE WONDERFUL SPORT OF FENCING:

Fencing is one of the original sports in modern Olympics. It is also an NCAA sport with scholarships available to many universities. The uniqueness of the sport of fencing is in the fact that it is the safest among all the other martial art sports since it requires absolutely no body contact. All points are scored by the tip of a flexible foil, contrary to hands or legs as used in the rest of the martial art sports. Fencing is the sport of swordplay. It is a sport of mind and body discipline that can’t be taken to a street fight or any physical aggression of any kind. The sport of fencing is the second fastest sport on earth. In this sport, you will see two fencers in an intense, powerful, and smart performance on a six-feet-by-40-feet strip of ground. The movement is so fast the touches are scored electrically. Fencers face off on a 14 m x 2 m (you may want to put the equivalent in feet for us metrically dimwitted Americans!) strip with one of three kinds of swords and duel each other not for blood or honor, but points. Fencing is a great example of a sport where you compete on your own, but can also work together as group or team to win a match. Fencing requires strength, speed, balance, and a very sharp mind. A good strategy is perhaps the most important part of the sport, but fair play and sportsmanship are also necessary. Many colleges and high schools have fencing teams. Adult competitions are held between clubs all over the country and the world. 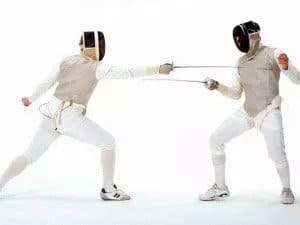 WHAT FENCING CAN DO FOR YOU?

Based on our world class training system background, we believe that the values and ethics taught through fencing will lead students not only to excel in the sport but also in life. Fencing can help you acquire the reflexes of a boxer, the legs of a high-jumper, and the concentration of a tournament chess player. The sport develops your agility, strength, speed and cunning. And because it’s action-packed, it’s known as the fastest martial sport of them all. Fencing develops and encourages the spirit of healthy rivalry and competition, emotional control, confidence, courage and self-discipline. Even though fencing is not a team sport, the sense of camaraderie and team work will develop into qualities that determine not only the winners in the sport and also in future living. The spirit of healthy competition, justice and fair play helps students achieve balance and harmony with the co-existing world. The coaches and the experienced fencers will always extend the meanings and values of hope, honor and hard work to the upcoming generation of fencers. For many fencers, the ultimate goal is to become a champion, Olympian or otherwise. With the collective help of coaches, parents, other fencers, and most importantly the fencer’s determination, we can achieve these goals. Most importantly, however, our fencers will learn to overcome and win not only against an opponent, but also themselves, their weaknesses and fears, and ultimately realize their potential!

The sport of fencing is a uniquely classic sport. Fencing develops discipline, balance, coordination, and sportsmanship. It helps youth develop quicker reflexes and the ability to make fast analyses of tactical situations which transfer to problem solving skills. Mentally it is mind consuming, allowing not a moment’s break; earning its nickname “Physical Chess.”

IS FENCING A SAFE SPORT?

The modern sport of fencing only remotely resembles the old dueling styles of past centuries. Today’s fencers wear a steel mesh mask, strong protective clothing, and use flexible, blunted blades. Fencers wear protective gear on their bodies and faces at all times during play. The object of the sport is to earn points by scoring touches within the target area, never to cause harm or injury.

Fencing is great exercise, a way to meet new friends and learn a new skill. On top of that, it’s a great conversation starter. Kids apply the discipline and problem solving skills learned during fencing at home and school; adults get to network in a small community. Our fencers learn how to succeed both in winning and in failure; teen fencers can continue to collegiate varsity programs. And let’s face it–we love to play with swords!

WHAT IS THE HISTORY OF FENCING?

Fencing began thousands of years ago as a way of training soldiers to fight with swords and eventually became a competitive sport in which anyone can participate. (You need something to begin this sentence here) into Fencing appeared in the early Bronze Age and, together with the javelin throw represents the oldest armed combat skill. (Start a new paragraph) The roots of Western fencing come from the Crete-Mycenaean technique of the two rapiers combat, and it was developed in the first Roman fencing schools. In the Middle Ages, fencing flourished when the knight’s codex ordered that each knight should take over the seven knight skills (septum Ares prostatism) among which fencing was the most important and honored. In the epoch of a thousand schools, which began with the European Renaissance and lasted until the First World War, fencing bloomed and flourished. During that period fencing was an everyday part of life for millions of people, an activity of a thousand fencing schools, a compulsory subject for all military and dramatic academies and an unavoidable (required? requisite? necessary? imperative? one of these words may fit better) skill in civil and court education. The skill of fencing went beyond the purpose of combat as necessary in war and duel, and became also a matter of prestige and competition, a primary (?) theme and amusement for many fencing schools in peace, throughout generations and whole nations.

HOW LONG IS A BOUT?

Pool bouts are 5 points in 3 minutes played, yet the direct elimination matches are 15 points and consist of three three-minute played periods.

WHAT ARE THE WEAPONS USED?

Foil, épée and sabre are the three weapons used in the sport of fencing. Foil and épée are point-thrusting weapons. Sabre is a point-thrusting as well as a cutting weapon. The target areas differ for the three weapons, even though all three are scored electrically. The three types of fencing weapons are separated by the difference in bill gard, target area and blade shape. (While it is not unusual for fencers to compete in all three events, they generally choose to develop their skills in one weapon. Until recently, women were permitted to compete only in foil, but now the USFA & FIE offer national competitions for women in épée and sabre. Women’s épée was added to the World Championships in 1989 and was held for the first time at the Olympic Games in 1996.)

The foil has a flexible rectangular blade, approximately 35 inches in length, weighing less than one pound. Points are scored with the tip of the blade and must land within the torso of the body. The valid target area in foil is the torso, from the shoulders to the groin, front and back. It does not include the arms, neck, head and legs. The foil fencer’s uniform includes a metallic vest (called a lamé) which covers the valid target area, so that a valid touch will register on the scoring machine. A small, spring-loaded tip is attached to the point of the foil and is connected to a wire inside the blade. The fencer wears a body cord inside his uniform which connects the foil to a reel wire, connected to the scoring machine. There are two scoring lights on the machine. One shows a green light when a fencer is hit, and one shows a red light when her opponent is hit. A touch landing outside the valid target area (that which is not covered by the lamé) is indicated by a white light. These “off target” hits do not count in the scoring, but they do stop the fencing action temporarily.

The épée (pronounced “EPP-pay”), the descendant of the dueling sword, is similar in length to the foil, but is heavier, weighing approximately 500gm, with a larger guard (to protect the hand from a valid hit) and a much stiffer blade. Touches are scored only with the point of the blade. The entire body is the valid target area. The blade is wired with a spring-loaded tip at the end that completes an electrical circuit when it is depressed beyond a pressure of 750 grams. This causes the colored bulb on the scoring machine to light. Because the entire body is a valid target area, the épée fencer’s uniform does not include a lamé. Off-target hits do not register on the machine.

The sabre is about the same length and weight as the foil. In sabre fencing, the athlete can use both the tip and the cutting edge to score points, and the target area is anywhere from the opponent’s waist up to the top of the head.

WHAT IS THE FENCING RIGHT-OF-WAY?

One of the most difficult concepts to visualize in foil and sabre fencing is the rule of right-of-way. This rule was established to eliminate apparently simultaneous attacks by two fencers. In essence, right-of-way is the differentiation of offense and defense, made by the referee. The difference is important only when both the red and green lights go on at the same time in foil and sabre. When this happens, the winner of the point is the one who the referee determined had the right to offense at the time the lights went on. Épée does not use the right-of-way in keeping with its dueling origin – whoever first gains the touch earns the point. Or, if both fencers hit within 1/25th of a second of each other, both earn a point. However, it is equally important to have a sound defense for épée, since the entire body must be protected from a touch.

HOW DO YOU FOLLOW THE ACTION IN A FENCING BOUT?

For those new to fencing, it is difficult to follow the lightning speed of the fencers’ actions. To become more comfortable in watching a fencing bout, focus on one fencer. The fencer being attacked defends himself with a parry, a motion used to deflect the opponent’s blade, after which the defender can make a riposte, an answering attack. Thus, the two adversaries keep changing between offense and defense. Whenever a hit is made, the referee will stop the bout, describe the actions, and decide whether or not to award a touch. Fencers seek to maintain a safe distance from each other, that is, out of range of the other’s attack. Then, one will try to break this distance to gain the advantage for an attack. At times, a fencer will make a false attack to gauge the types of reactions by the opponent that can be deceived in the real attack. As you become accustomed to the speed of the game, the tactics and strategies become more apparent, and you will gain a better understanding of the finesse and fascination of fencing! (This article courtesy of the U.S. Fencing Association) But the best thing about fencing is – IT’S FUN! Try it, and see why there’s nothing like fencing!
Scroll to Top
We use cookies to ensure that we give you the best experience on our website. If you continue we assume that you are happy with it.OkPrivacy policy